In Search of Color

When I think about color, I think about viewing it, mixing it and pairing it but rarely making it. So when it was time for me to take a much needed week away, I decided to go to the Catskills and take along Jason Logan of Toronto Ink Company’s book Make Ink: A Foragers Guide to Natural Ink Making. Over the next 7 days, I hiked and gathered and simmered and crushed and sieved to make 10 inks and discovered a new relationship with color.

My process has always been about endurance, waiting and just the right amount of happenstance so going a step further to creating my inks from scratch felt like a logical jump. As I muddled through to create green and purple and pink and a lot of browns, a few laws of color making began to emerge. 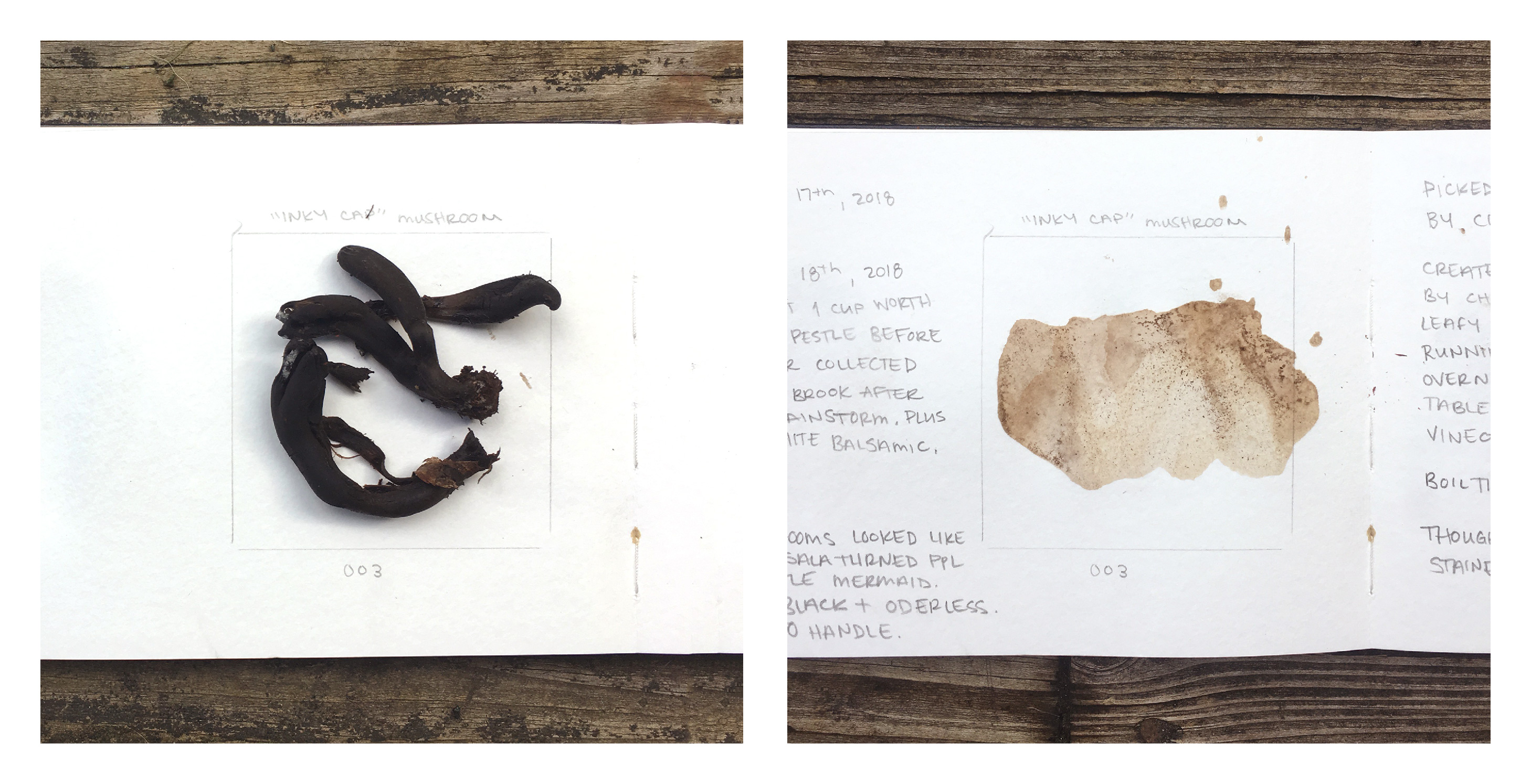 On my first hike and hunt for color, I noticed these small, pitch-black, finger-shaped mushrooms dotting the path. I don’t know why I even noticed them, they were so dark against the forest floor, an almost pure black compared to most of what you find in nature. I thought to myself “I want that black!”

So I gathered them up and followed the tried and true steps to pull out that inky black. There was mashing, there was boiling and in the end, the color I got was a very light, earthy brown. Where had my black gone? The resulting color was beautiful in its own way but it wasn’t exactly what I had in mind.

This was my first lesson. That just because something has a color doesn’t mean it is that color. Logan lays this out in the book what he says, “Light is made up of all colors, each one vibrating at a different frequency. So when we say an ink is blue, it’s not that it contains blue, but rather it is giving us back blue light while absorbing all the other color vibrations.” Still, the adventure in this is in the trying and I wouldn’t have known what color it made at all if I hadn’t given it a shot. Lesson learned!

Patience and perseverance are key ingredients

I didn’t get my black from those mushrooms so I decided to actually follow a recipe (sorta) and use charcoal/ash from the campfire I made the night before. I picked out the blackest chunks from the fire pit, the ones that if you touch them the wrong way simply crumble in your hands.

For the next 3-4 hours, I broke them down, crushing them and then grinding them with a mortar and pestle, before running the pieces through a fine sieve to make sure each and every particle was small and uniform before mixing it with the water and gum arabic. It was time-consuming, it was laborious but the results were a gorgeous smoky gray that takes my breath away.

Now for how long that whole process took, I know, I could have spent more time on it. I could have gotten those particles to be just a biiiiit smaller and I would have ended up with a pure black. Giving the ink the time and the work it needs to come alive can change the recipe entirely. 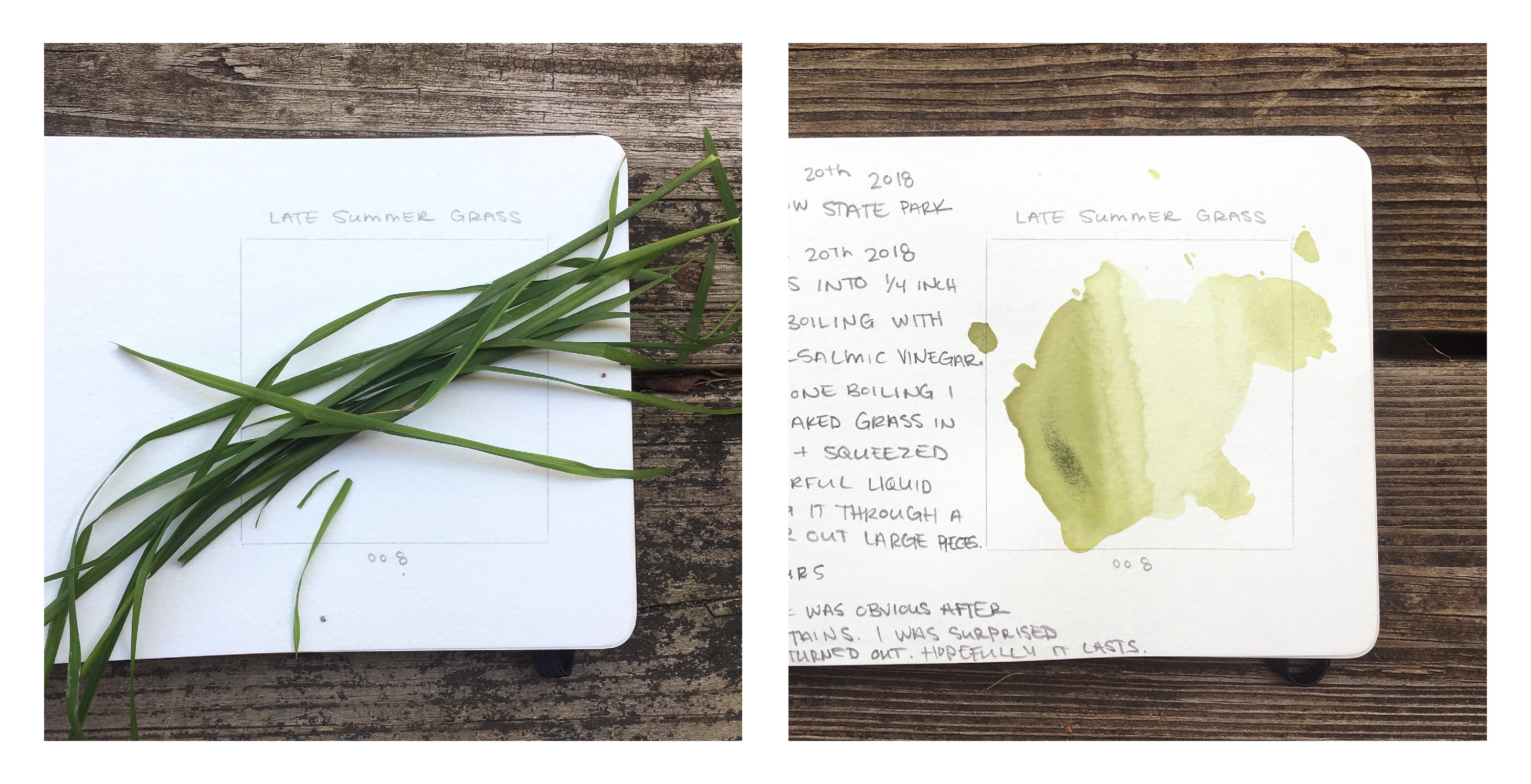 When I first started all I was making was browns. I was making brown like it was my name! (It is actually, that’s my last name ????) Until finally I was getting some other colors in the mix, some red from a beet, some yellow from goldenrod. I wanted to make green next. I was ready, but the recipe in Make Ink was complex and required lye, which after helping my mom make old fashion lye soap as a kid, I was not about to mess with without the proper supplies and in someone else cabin.

So I thought, green green green how else can I get green. As we’ve already learned just because something has a color doesn’t mean it is a color, so it’ll not like I could pull a bunch of leaves off the greens and make green. But didn’t we all grow up ruining pants with grass stains? Let’s try some grass!

I set to work gathering grass and simmering it and pulling out every bit of color I could get and the result was a beautiful bright green. I had nailed it! That is until a few days later when I saw that my grass ink had faded into a pale yellow. What the what had happened? Turns out grass is notorious for fading but the yellow that remained was still lovely and I had the memory of that first swipe of vibrant green. My grass ink was a reminder that this is a process and to not be too precious with the things we make. 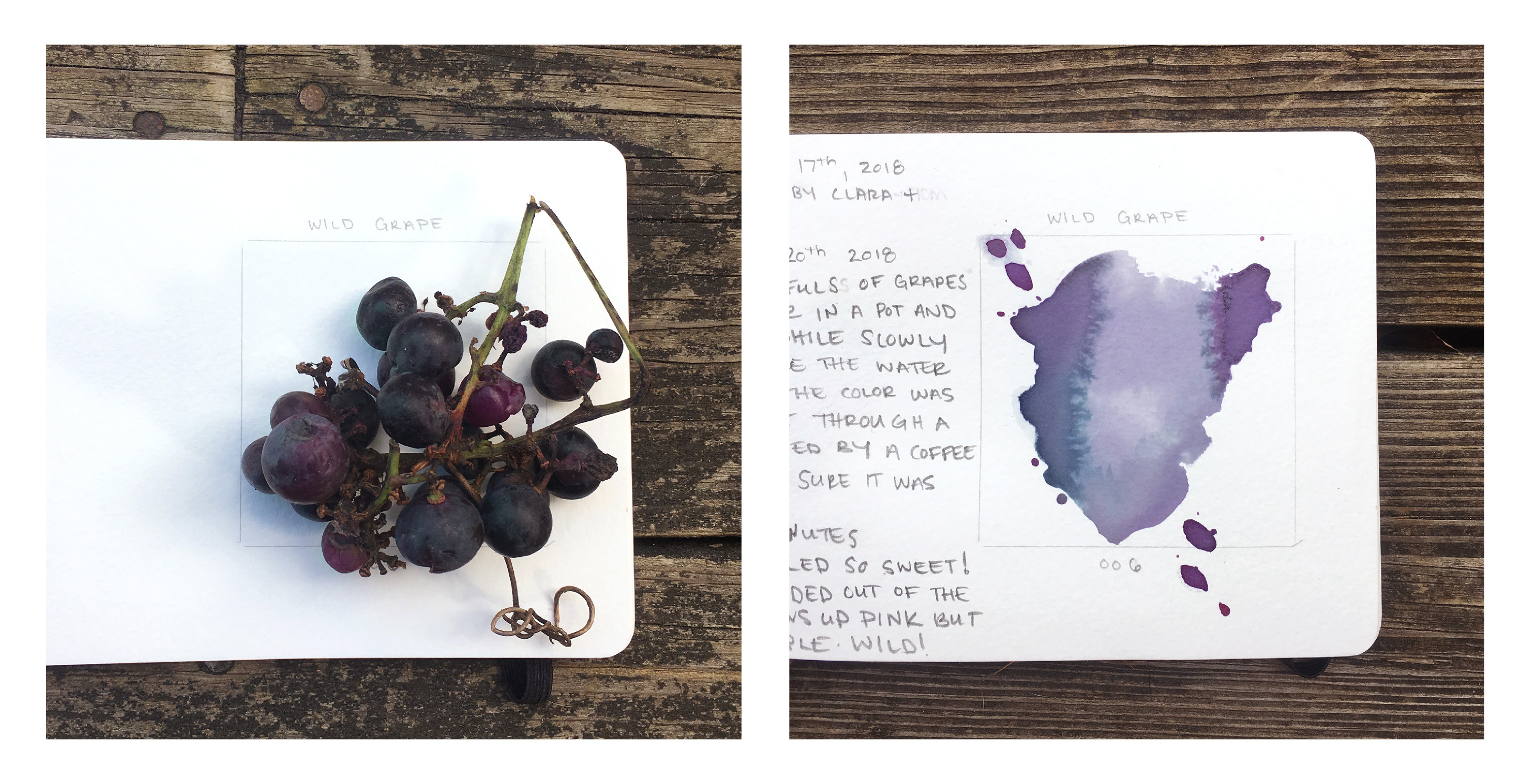 Make room for magic (and mistakes)

The little cabin I was staying at had 2 lovely hosts, Tom and Clara, who were “just tickled” by my project to spend a week in the woods foraging for natural ink. After hearing about it Clara stopped by with an old book she had about natural dyes, a little beet from her garden and directions to where to find wild grapes and sumac trees. It was such a wonderful happenstance that my host was into natural dye making (very similar to natural ink making) and could help me on this adventure.

So I went out and gathered up a collection of juicy wild grapes and two bundles of sumac before following the steps in both Make Ink and Clara’s book. The grape ink cooked up fast and made a such a beautiful color that almost sparkled I was absolutely stunned. How amazing that Clara pointed it out to me! The sumac took a little bit longer and I was excited for the pale pink that promised to emerge.

While the sumac simmered on the stove, near the sweet point where it would be ready for the next step, Clara stopped by again for a chat. During that brief exchange, the water partially boiled away and the color I was left with was now sumac but burnt. Still, I finished it up, hoping somewhere along the line it would right itself (it didn’t). The resulting ink was actually better than I had planned though, an almost burnt sienna which is one of my favorite colors to use in my work. So, in the end, was it a mistake, or was it magic?

I’m just starting on this journey so these are probably very basic for the experienced color hunter but the way I’m viewing the world around me is now different. Let’s just say it’s now full of color possibilities.

Just a heads up: this post contains an affiliate link, which means if you click through to make a purchase I get a small commission. It’s a nice little way for me to supplement my art income while also sharing with you the products and services I really love!